[This is further testimony about sexual harassment and abuse in steerage class, taken from testimony given by a female government inspector, disguised as an immigrant aboard ship, reporting in 1909 to the Dillingham Immigration Commission.]

“There was an outside main deck and an upper-deck on which the steerage were allowed.   These were each about 40 feet wide by 50 feet long, but probably half of this space was occupied by machinery, ventilators, and other apparatus.  There was no canvas to keep out the rain, sun, and continual showers of cinders from the smokestack. These  fell  so thick  and  fast  that  two  young  sailor  boys were kept busy  sweeping  them  off the  decks. 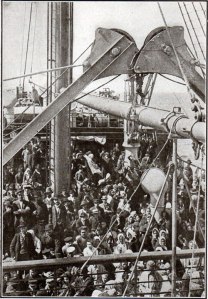 “It is impossible to remain in one’s berth  all  the  time, and  as  there  were no smoking  and  sitting rooms , we spent  most of  the  day  on  these decks.  No benches or chairs were provided, so we sat wherever we could find a place on the machinery, exposed to the sun, fog, rain, and cinders.   These not only filled our hair, but also flew into our eyes, often causing considerable pain.

“These same two outdoor decks were used also by the crew during their leisure. When asked what right they had there, they answered: ‘As much as the passengers’   No notices hung anywhere about to refute this.   The manner in which the sailors, stewards, firemen, and others mingled with the women passengers was thoroughly revolting.  Their language and the topics of their conversation were vile.   Their comments about the women, and made in their presence, were coarse. What was far worse and of continual occurrence was their handling the women and girls.    Some of the crew were always on deck, and took all manner of liberties with the women, in broad daylight as well as after dark.

“Not one young woman in the steerage escaped attack.  The writer herself was no exception.   A hard,  unexpected blow in the offender’ face in the presence of a large crowd of men, an evident acquaintance with the stewardess, doctor, and other officers, general experience, and manner  were all required to ward  off further attacks.    Some few of the  women, perhaps,  did  not  find  these attentions so disagreeable; some resisted them for a time, then  weakened; some fought  with all their   physical  strength, which  naturally  was  powerless  against   a man’s.   Others were continually fleeing to escape.   Two more refined and very determined Polish girls fought  the men with pins and teeth but  even they  weakened  under  this  continued  warfa.re  and  needed some moral support about the ninth  day.   The atmosphere was one of general lawlessness and total ‘disrespect for women.  It naturally demoralized the women themselves after a time.   There was no one to whom they might appeal.    Besides, most of them  did  not  know the  official language   on  the  steamer,  nor  were  they  experienced enough to know they were entitled  to protection.

“The interpreter, who could and should be a friend of the immigrants, passed through the steerage but twice a day.    He positively discouraged every approach.  I purposely  tried  on several occasions to  get  advice  and  information from  him,  but  always  failed.    His usual answer was, ‘How in the d—do I know?’ The chief steerage­ steward by his own familiarity with the women made himself impossible as their protector.   Once when a man passenger was annoying two Lithuanian girls, I undertook to rescue them. The man poured forth a volley of oaths at me in English.  Just then the chief steward appeared, and to test him, I made complaint. The offender denied  having sworn  at  all,  but I insisted  that  he  had, and  that I understood.  The steward then administered this reproof, ‘You let them girls alone or I fix you —— easy.’

“The main deck was hosed every night at 10, when we were driven in.    The upper deck was washed only about four times during the voyage.   At 8 each evening we were driven   below.   This was to protect the women, one of the crew informed me.   What protection they gained on the equally dark and unsupervised deck below isn’t at all clear.   What  worse things  could  have  befallen  them  there  than those to which they  were already  exposed at  the hands  of  both  the crew  and  the  men  passengers  would  have  been  criminal offenses. Neither  of these decks was lighted, because, as one sailor  explained, maritime  usage  does not sanction  lights  either  in  the  bow or  stern of a vessel, the two parts  always used by the steerage.    The descriptions that  I might  give of the mingling  of  the crew and  passengers on  these outdoor  decks would  be endless, and  all  necessarily  much the same.   A series of snapshots would give a more accurate and impressive account of this evil than can words.  I would here suggest that any agent making a similar investigation be supplied with a Kodak for this purpose.”

[Read more about immigrants and Ellis Island in my historical novel, Guardians of the Gate.]