[A Czech immigrant woman tells of her journey from Prague to Rotterdam and then in steerage to America in 1920.]

“Three days and three nights were spent riding in local trains from Prague to Rotterdam. At Oldenzaal, four stations distant from Rotterdam, all our baggage was taken from without an explanation why this was done. We were marched to the barracks near the railway station and there were sent into compartments with walls of canvas and told to undress. Our dresses were put on hangars and sent to the disinfection plant. We walked to another room wrapped in blankets. These were taken from us, so that we all stood there naked. A woman with a bucket and a large brush such as is used in whitewashing, brushed our bodies from neck to feet with a strong carbolic disinfectant. There were about forty of us. It occurred to none to ask how we felt about having to expose our bodies to the eyes of thirty-nine women and girls of all ages.”

“After this, we were sent under a hot shower bath and given soap and a towel to wash our bodies. Then a woman with a bucket of crude oil came to apply the oil to our heads. We were then, at eleven p.m., sent to bed and told that we could wash our heads in the morning. We found the barracks to be a kind of shed with beds along one side of it and tables along the other. Each woman was assigned a bed with a number. The rough mattress and the two dirty blankets on the bed were infested with vermin that promptly found its way to our heads. The baggage was returned to us broken, with handles torn off, with broken locks, and our clothes creased in the steaming, to which they were subjected.

“We lived in these barracks three days. As long as there were any vermin on our heads, we could not depart. Breakfast consisted of a small quantity of black coffee and a piece of bread; the midday meal was a stew with white bread. The stew appeared inedible to me. In the evening, we were given salt herrings, marmalade, bread and tea. After three days, we were transported to a hotel in Rotterdam, where they served stew all the times, but at least the tables were covered with cloths and the service was decent. Here, we waited four days during which doctors examined our eyes and scalps. A charge of one dollar was made for the cleaning of the scalp, and those who paid and submitted to the cleaning were passed as ready to embark; their card was stamped “Head Cleaned.” Those who could not pass the physical test or had wrong papers were led away. No attention was paid to their lamentations.

“We embarked at seven p.m., after our baggage was disinfected again. In the steerage of the steamship, I found myself in a large cabin that had two rows of bunks on each side, one above the other. About five persons cold sleep on each tier, but there was no division between the beds, and one went in head first. We had to stow our baggage under the bunks, and when the sea was rough, our baggage and shoes flew back and forth across the floor. There was a rough mattress, and the two blankets were infected with vermin; there were no pillows. Some of the women in our cabin possessed no understanding of cleanliness; they made a privy of the cabin.”

We ate at tables that stood under a ceiling that was the floor of the deck above. That floor was made of boards that did not fit together tightly and permitted dirt to fall through the crevices onto our tables. Those who ate on the deck below us had the same difficulty and dirt carried on shoes fell into their food. Any complaint made was answered by the seamen who served us, who said that we should have sailed in the second class if we wanted better treatment, that human beings did not travel in steerage; only animals did. 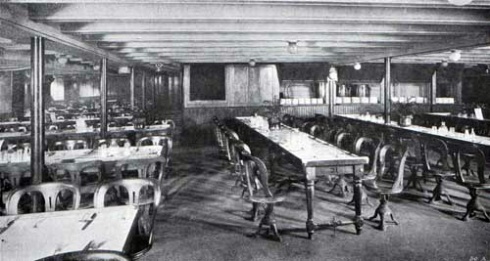 “There were only four washstands in the whole steerage and these were accessible only in the forenoon. The doctors avoided the steerage and only when a woman became seriously ill was she carried to the second class to be examined by the doctor.

“Breakfast consisted of coffee, bread, cheese, marmalade, butter, but if one did not hasten to take his share of the food on the table, aggressive individuals snatched up everything and nothing was left for backward ones. Stew was served daily for luncheon, also an evil smelling fish aspic and peas that were not edible; and coffee. For supper there were beans, fish conserve and hash. Dessert was not served. On Sundays, the only addition to the menu was four hard-tack biscuits that were thrown on each bed.”

[Read about immigrants and Ellis Island employees in my historical novel, Guardians of the Gate.]

2 thoughts on “True Immigrant Tales: “We All Stood There Naked””