[This is another firsthand immigrant account from my oral history collection.]

“I was born in Queens County, Ireland, in 1911.  I was one of thirteen children, with six brothers and six sisters.  I attended school until 10th grade, which was the maximum education offered at that time.  On the farm where we lived, I helped my mother with chores around the house, picked potatoes, planted and tended the vegetables, and milked the cows.  I grew up in a small town with a country-like atmosphere, where neighbors and friends had close relationships with one another.

“I really knew nothing about America, only through correspondence from my relatives there. I knew that it was a good country with good opportunities.  There were no jobs in Ireland, so I had hopes of working and supporting myself over here, which I did.  I was willing to take any job, anything that I could work at.  I really had no fears because I knew I was coming to a better life. I expected it to be a nice country with friendly people and that I would like it here.  I had no sorrows about coming to the United States, none at all, just when I left my family.

“In April 1927, my older sister and I sailed from Queenstown on the S.S. George Washington steamship to go live with my aunt in Elizabeth, New Jersey. On the ship I was sick for seven of the eight days.  The sea was very rough, even though it was beautiful weather.  At the end of our journey, my sister and I stayed up on the deck all night to see who would see the first lights of America.

“Before I left the ship to go to Ellis Island, I had to show my passport to make sure I had not been a stowaway because I wasn’t to the table for meals.  I ate only what my sister brought to me from the dining hall.  When we got on the island, we were relieved that our journey was over.  When we entered the building, they separated the men from the women and put us in separate rooms. Then, we had to take all our clothes off.  They gave us a sheet to put around us and they steamed all our clothes.  When they were dry, they gave them back to us, wrinkled, and we had to put them on.  When everything was done, we took a boat to Hoboken and then a bus to Elizabeth. 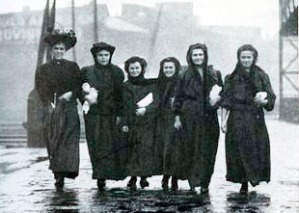 “To find a job, my cousin took me around to different places.  I spoke English, so there were no problems with the job interviews. Some places did have signs that said, “No Irish Need Apply,” and even one that said “No Catholics Need Apply,” and we didn’t bother with them. I got a job in a shirt factory in Elizabeth, where I worked six days a week, eight hours a day.  I took the bus to work, and the fare was a nickel. After a month working, I went to night school and continued for a year.  Then I got a job in an office at RCA in Harrison, and I stayed there until I got married in 1936.

“I have no regrets.  I’m glad I came because I made a better life for myself.  It wasn’t hard to make new friends.  Everyone was very, very nice. People wanted me to talk more, because they liked my accent and they wanted to hear more of it.  I didn’t mind, because I came here to make a living and I was glad to be accepted.

[You can learn more about Ellis Island and its employees in the 1890s and early 20th century in my historical novel, Guardians of the Gate and its sequel, Defenders of Freedom.]