“Like many more immigrants like myself, I came to this country to seek a living, because living over there [in Tipperary, Ireland] was very, very poor.  Work was scarce and hard.  I worked on a farm.  I would get up at four o’clock in the morning.   You’re out milking cows and doing all sorts of other things, and your day’s work is not over until eight o’clock in the evening. Throughout the day you helped do the chores and sometimes you would even be picking potatoes or be out in the fields helping the men make hay, and anything like that to make, as they say, an honest shilling.

“I was young, eighteen years old, and I wanted more out of life, so I decided that I ought to try the United States to make a living.  Once I decided that and made all the arrangements, I had no fears about it, because I knew I was going to be with some of my family.  There was some loneliness at first, but that’s to be expected, I should say, with everybody.   And, I came at a time when nobody was afraid here.  You could go walk out in the middle of the night and nobody would even hurt you.  It was nice then.   It was very, very nice.  People would try to be your friend, if nothing else.

“Anyway, in 1920, I left my home in Ireland on a Friday morning.  I went to a place then called Queenstown in County Cork, Ireland.  I was there for the greater part of Friday and Saturday, because you had to go through quite a number of tests and screening to be allowed to board the ship  On Sunday morning around eight o’clock, I did board the ship.  It was called the RMS Carmania.

“It was seven days’ sailing on the Atlantic Ocean. We arrived in the United States a week from that Monday, around two o’clock in the afternoon in the harbor of New York.  The nicest thing I saw after being so seasick—and I might say I was very, very seasick—the nicest thing I think I ever experienced was seeing the Statue of Liberty.  It meant we were here and we were safe.  We had landed and we were safe. 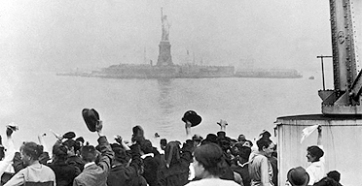 “I had no problem at all with any processing here because I had passed all the tests back in Ireland before boarding the ship.  My aunt and brother were there to meet me and I went to my new home with them.  They helped me at first and I stayed for a short time with them, but then I had to start out on my own.  My aunt took me to an agency and I worked for awhile in a doctor’s office as a receptionist, answering the phone, making appointments, and things like that. I was only there for eleven months when he passed away.  I was out of work for a little while and then I went to work in the office for a chemical company.

“Looking back, there was disappointment.  There were loans from my family and my friends.  It was something, you know, you sometimes wondered if you could make it.  Thank God I did.”

[You can learn more about Ellis Island and its employees in the 1890s and early 20th century in my historical novel, Guardians of the Gate and its sequel, Defenders of Freedom.]