This true story is from my immigrant oral histories collection when I was researching for my historical novel, Guardians of the Gate (about Ellis Island in the 1890s), and its sequel,  Defenders of Freedom. Because of the emotional level in his narration—even when he retold his story 65 years later—I’ll let Wilhelm tell the story in his own words.] 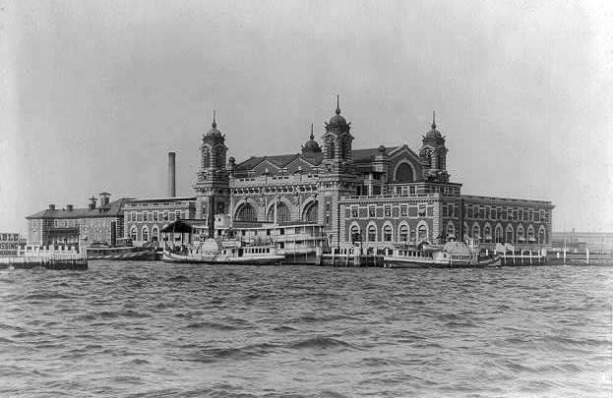 “I came by myself to the United States from Germany in 1910 when I was 16 years old.  I had been on small boats on lakes before, but never on such a big ship for so many days.  Like others, I got very seasick.  I kept vomiting and couldn’t keep any food down for days.  Even after, I didn’t eat much. I didn’t like the food and just ate some pieces of chocolate I had with me.

“When I got to Ellis Island, we all had to line up for the medical and they would examine us.  Some people could pass and they marked their coats with chalk.  Some they marked on the left and some they marked on the right lapels.  Those that were marked on one side could go through right away.  Maybe they had been here before, I don’t know.  But I got a mark—‘This is back.’

“So they let us through a big hall and we had to strip naked in a small room.  And we met two fellas.  They were doctors with stethoscopes.  I didn’t know what a stethoscope was—I learned that after.  They tapped us on the chest and on the back and then I had to run around.  I was the only one they examined that way.

“All of a sudden, one doctor yelled and raised his fist.  He was gonna knock the other fella down, the other doctor.  I didn’t know what it meant. I was told afterward.  One said I had consumption, and the other doctor said there was nothing wrong with me—all I needed was a bellyful of food for a couple of months.  I was undernourished.

“Well, finally, I passed.  And when I got out I had to go before an examiner, a judge [Board of Special Inquiry hearing].  My brother had arranged for relatives that lived in Brooklyn to take care of me.  The examiner said to my cousin, ‘You have to put up bail that this young man will not become a burden to the United States.’  My cousin owned property and a business, so that was not a problem for him.

“Then the examiner said to me, ‘You are free to go.’  And [Wilhelm’s voice breaking with emotion as he tells the story] when I—I tell the news ‘you are free,’ I still choke up.  The judge says, ‘the boy [he pauses, with tears streaming down his face] may be undernourished, [he pauses again, and then says, sobbing] but he has a wonderful mind.’  And he said again, ‘You are free to go,’ and we went out into America.”

2 thoughts on “True Immigrant Stories_6: A Teenager at Ellis Island”