[American journalist Broughton Brandenburg traveled on a German steamship with Italian immigrants in October 1903 and wrote about his observations in his book, Imported Americans.  This is part of his account.]

“Sunday fell on the 11th, and it was a pleasant day till afternoon, when it began to get rough. The ship’s band was sent forward to play on the hurricane deck, in order to cheer up the emigrants, many of whom were beginning to look very badly, and to endeavor to brace them up till port could be reached; for it is a great saving to the company to take as many passengers as possible to Ellis Island in a good state of health.

“On this day occurred another medical inspection; and to make all of the health tickets appear to have been properly punched as each passenger was inspected day by day, a steward whom I had heard called Beppo went about and carefully punched any vacant spaces. As neither my wife nor myself had gone by for the last three of the four health inspections, having missed the call by being busy eating in the petty officer’s cubby, Beppo punched out the full twelve days of the voyage at one punching. When those tickets were presented at Ellis Island there was nothing to show that their bearers had not been properly inspected each day. . . .

“In the morning the warmth of the Gulf Stream began to stir the chilled blood of all hands, and the first sail sighted since the Azores caused the poor emigrants to rejoice, as it was a token that they were nearing America. In a slow way the Italian provincial songs which had prevailed changed to American airs, attempted by those who had been in the States. Everybody seemed happier than they had been for days, and first-cabin passengers began to appear in numbers on the forward end of the hurricane deck. Several young women had brought out little bundles of delicacies, candy, oranges, apples, etc., and were dropping them over the rail to the emigrant children below. This kindly occupation was observed by the first officer, who was on the bridge, and he came down in haste and rebuked the first-cabin young women with severity, and sent the ship’s interpreter down to hector the emigrant children and their mothers. I wonder what he would have said had he known the quantities of first-cabin fare that was being smuggled to emigrants by the stewards and cooks every day. . . .

“The night before, the joy among the emigrants that they were reaching the Promised Land was pitiful to see, mingled as it was with the terrible dread of being debarred.

“There was little sleeping all night. About twelve o’clock the women woke up the sleeping children, opened their packs, and took out finery on top of finery, and began to array the little ones to meet their fathers. My wife pleaded with Camela to stay in her bunk and wait for daylight at least, but Camela could not understand why she should wait, and at three o’clock little Ina was brought up on deck arrayed in her very best, and as clean as her mother could make her with a small bottle of water and a skirt combination wash-rag and towel. 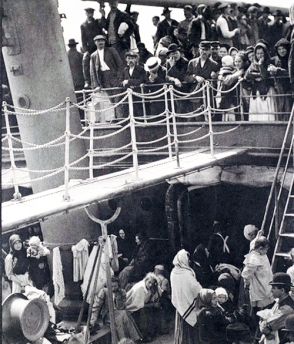 “By six o’clock all the baggage in the comartments had been hauled out and up on deck, and the hundreds of emigrants were gathered there, many trying to shave, others struggling for water in which to wash, and mothers who had been unable to dress their children to their satisfaction in the cramped quarters below were doing the job all over again, despite the chill air.

“Happy, excited, enthusiastic as they were, there was still that dread among the people of the “Batteria,” the name used to sum up all that pertains to Ellis Island. I saw more than one man with a little slip of notes in his hand carefully rehearsing his group in all that they were to say when they came up for examination, and by listening here and there I found that hundreds of useless lies were in preparation. Many, many persons whose entry into the country would be in no way hindered by even the strictest enforcement of the letter of the emigration laws, were trembling in their shoes, and preparing to evade or defeat the purpose of questions which they had heard would be put to them.

“Some of the people who had confided in me came around even two or three times to ask me whether I thought they looked at all “sick in the eyes.” One woman who fancied that her baby had trachoma gorged the child all that day in an effort to get it asleep and keep it asleep, so that the doctor should pass it without examining it, as she was prepared to protest against its being waked up.

“More than once I heard leaders of groups telling men:

Remember, you have got no work and you paid your own way.

Oh, but they will not let me in if they think I have no work and will have no money to keep my family from charity,” protested one fellow whom I knew was under promise of work.

That makes no difference; you are a jackass not to do as I tell you; don’t you think I know my business? was the answer he received.

“Numbers of the people were privately taking out and setting aside varying sums from their slender stores of money, with which to “pay something to the American inspector and American doctor.” So accustomed were they to extortion by officials that they refused to believe me when I told them that it would cease at Ellis Island. They were astounded and deeply puzzled when it did.”

[You can read about immigrants and Ellis Island staff in my historical novel, Guardians of the Gate.]